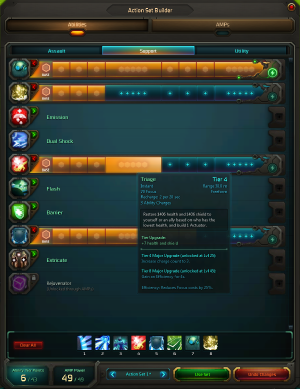 An ability is an effect. Abilities can be triggered from the action bar and the abilities in that bar can be assigned from the Action Set Builder ("B").

Most abilities fall into three categories which each class has: Assault, Support, and Utility. There are also Innate, Path, and "T" abilities.

Unlike other games, WildStar has a Limited Action Set, or LAS, that has a limited number of active slots for abilities, so it is important to select the correct action set for any given encounter. At level 50, characters have 8 ability slots and access to two different action sets, so players could choose to use one for DPS and the other for healing or tanking.

In the Action Set Builder, players can fill their LAS with any combination of ability types. To add an ability to the LAS, click the green arrow to the right of the ability icon. To remove an ability, click the red arrow or right click the ability's icon at the bottom. The order of abilities in the LAS an be shuffled by clicking and dragging the icon to the desired spot. Abilities can be changed at any time without a cost while not in combat.

To increase the power of an ability, ability points can be invested into that ability. A character at level 50 has 41 ability tier points available to spend. An additional 7 bonus points can be unlocked from vendors and drops.

Each ability can be strengthened up to tier 8, depending on the number of ability tier points available. To invest points into an ability, click on the + on the desired tier. Points can be adjusted by clicking on a lower tier or base. Each tier provides an upgrade boost which can be viewed by hovering over the ability. Each ability has 8 upgrade tiers. Tiers 4 and 8 have special major upgrades which require 5 ability tier points as opposed to the normal 1 point per tier. These major upgrades are unlocked at level 25 for tier 4 and level 45 for tier 8.

Once all abilities have been selected and points invested, click on "Use Set" at the bottom of the window to confirm the changes.