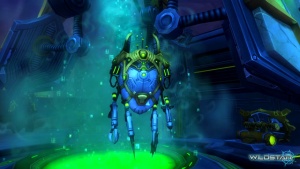 Augmentors are perhaps the most mysterious of all the Eldan constructs encountered so far on Nexus. From limited data gathered by scientists who have observed them, it seems that these rarely-seen constructs are directly involved in the Eldan technological process known as augmentation.

Although very is little is currently known about the specifics of augmentation, it is believed it to be a nano-technological process that results in a dynamic cybernetic transformation of the host. Unconfirmed theories posit that Augmentors inject their victims with a substance which carries the nanites responsible for facilitating the technological enhancements, following a complex set of selection protocols which determine exactly what kind of augmentation the host will receive.

Augmentors are by far the most advanced of all the Eldan constructs--and therefore the most valuable. It has been noted on many occasions that both Probes and Protectors alter their behaviors drastically if Augmentors are deployed, ensuring their safety no matter what the cost.

SECRET SCIENTIFIC ARCHIVES: The cybernetic monstrosity known as Metal Maw was created using augmentation. The creature serves as a frightening example of the power of the mysterious technology on planet Nexus.[1]