With the Heroes Evolved content drop, players are able to spend Protobucks and obtain a Character Boost Token which will allow for the creation of a new level 50 character. This guide focuses on general game information for a brand new player creating a level 50 character and provides links to additional information.

Once the Character Boost Token has been purchased and used on the character select screen, the character creation process is started. As seen at the top of the screen, there are several steps to the process: Experience, Race, Class, Path, Customize, and Finalize.

Experience allows a player to choose the Novice prologue to go through a tutorial and learn the basics of WildStar like controls, movement, combat, and housing, or to select the Veteran option and get right into the action on the surface of Nexus.

Customize allows a player to customize the appearance of their character. Each race has distinct appearance options to choose from.

Finalize is where a player verifies the options selected and assigns a name to their character. Character names must be a unique first and last name combination. The total length must be between 4 to 29 letters.

Players can choose between two different factions during character creation: the Dominion and the Exiles. Faction choice affects what races are available to choose from.

Both factions have access to the same classes, however only certain races can play certain classes. Each class can play as an assault or support role. The support roles are either tank or healer. Each class uses a weapon unique to that class and can equip light, medium, or heavy armor. The class armor is unique as well.

Paths are a game system loosely based on the Bartle test that allow players to choose secondary gameplay that fits their playstyle. Each path has unique missions, rewards, and abilities. The available paths are

Every boosted character comes equipped with basic level-appropriate Assault (DPS) gear, as well as additional items to ease the character into the world. These items include:

The Action Set Builder icon on the toolbar.

Each class has a unique set of abilities and AMPs (Advanced Modification Protocol). Before heading out, take a moment to set these up. These can be configured through the Action Set Builder, which is a flame icon in the toolbar at the bottom left or by pressing "B". Note: The icon will be highlighted with a number when unspent ability and AMP points are available. Mousing over the icon will give a breakdown of the available points. 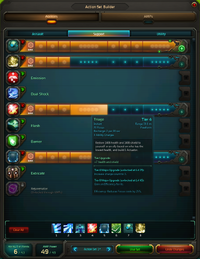 Unlike other games, WildStar has a Limited Action Set, or LAS, that has a limited number of active slots for abilities, so it is important to select the correct action set for any given encounter. At level 50, characters have 8 ability slots and access to two different action sets, so players could choose to use one for DPS and the other for healing or tanking.

In the Action Set Builder, abilities are broken into three categories, Assault, Support, and Utility. Assault is geared toward DPS and scales with assault power, Support is geared toward tanking or healing and scales with support power, and Utility provides interrupts, buffs, debuffs, and other helpful abilities. Players can fill their LAS with any combination of these abilities. To add an ability to the LAS, click the green arrow to the right of the ability icon. To remove an ability, click the red arrow or right click the ability's icon at the bottom. The order of abilities in the LAS an be shuffled by clicking and dragging the icon to the desired spot. Abilities can be changed at any time without a cost while not in combat.

To increase the power of an ability, ability points can be invested into that ability. A character boosted to level 50 has 41 ability tier points available to spend. An additional 7 bonus points can be unlocked from vendors and drops. Each ability can be strengthened up to tier 8, depending on the number of ability tier points available. To invest points into an ability, click on the + on the desired tier. Points can be adjusted by clicking on a lower tier or base. Each tier provides an upgrade boost which can be viewed by hovering over the ability. Tiers 4 and 8 require 5 points, instead of the normal 1 point, to unlock and provide special bonuses.

Once all abilities have been selected and points invested, click on "Use Set" at the bottom of the window to confirm the changes. 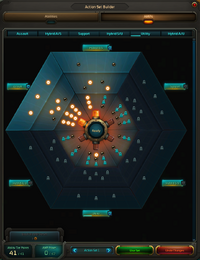 Every branch has 3 tiers. The first tier AMPs are the same for all class and role types. The other two tiers are unique to each class. In the first tier, each AMP costs 1 point. At least 3 points must be invested to access the second tier. In the second tier, each AMP costs 4 points. At least 8 points must be invested to access the third tier. In the third tier, AMPs cost 6 points. In the non-hybrid third tier sections, an ability can be unlocked and costs only 2 points. A character boosted to level 50 has 47 AMP power points available to spend. An additional 10 bonus points can be unlocked from vendors and drops.

AMP points can be adjusted at will until the "Use Set" button is clicked. Once the changes are committed, players must spend gold to reset individual AMPs, by right-clicking on them, or buy a full AMP reset, by clicking the button at the bottom left of the window.

Most class and role builds can be found on the Enigma guild forums or on the appropriate class subforums on the official forums.

The daily quest hub in Illium.

Newly boosted characters start out in their faction's capital city at the daily quest hub. This is Conqueror's Square in Illium for Dominion players and Champion's Corner in Thayd for Exile players. This area provides numerous vendors and quest givers for PvE and PvP content. Explore the vendors and pick up some quests. The capital cities provide quick transport to all the max level zones.

There are tour guides just outside of the quest hubs that can provide an overview of the city and all the amenities offered.

At level 50, the experience bar doesn't go away and instead of earning experience players earn Elder Points. Every 75,000 Elder Points are converted to an Elder Gem. These Gems can be used to purchase unique items from the Elder Gem vendor in the capital city as well as other vendors.

There are many more topics not covered in this guide that provide information on how to make the most out of WildStar. Explore the links below to find out more.

Any questions not covered in this guide can be posted on this article's talk page.