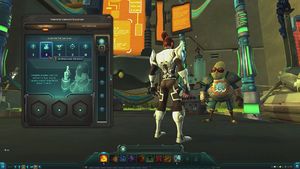 Contracts UI and board.

Contracts are are bite-sized, repeatable max-level content that can be completed in a relatively short time. They are available for both PvE and PvP content and come in three tiers. Taking on higher level contracts increases the player's chances for better gear, but also increases the difficulty. The contract points meter is filled by completing contracts which allows players to earn additional rewards. Players can choose from five available contracts and have up to three contracts active at the same time. PvE and PvP count separately. New contracts are available daily and are obtained from the Protostar Contract Dispenser located in each faction's capital city.

Each contract has the same rewards with the amounts increasing with the contract difficulty:

Reward points can be redeemed for a variety of rewards. The rewards differ between PvE and PvP contracts.