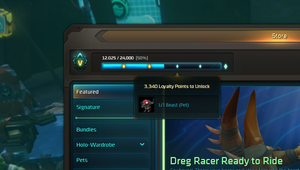 Cosmic Points are an account-wide currency similar to experience points. They are redeemable for Cosmic Rewards.

Players accumulate Cosmic Points by making purchases and redeeming product codes or C.R.E.D.D.. The amount of Cosmic players have earned is shown via the in-game store.

Players will earn rewards at specific points in each tier, and filling the gauge entirely progresses players to the next tier. Once a tier is completed, a totally new set of rewards will appear to be earned. Mousing over the reward icon will pop up a tooltip showing the next reward to be received.

Cosmic Points are earned by:

The following products purchased previous to the Free-to-Play launch will award Cosmic Points. These products are now available in the in-game store.

3-month, 6-month, and 12-month Signature Plans will also offer a Cosmic bonus, which increases the amount of Cosmic Points earned depending on the length of the plan. The longer the plan, the greater the Bonus.

Players will receive Cosmic Points for all WildStar product purchases as long as they're applied to the player's account. Any money spent on WildStar, including on a past or present subscription, awards Cosmic Points.