From WildStar Wiki
Jump to: navigation, search
A video explaining the Draken race in Wildstar made by the Curse Gamepedia YouTube Channel. 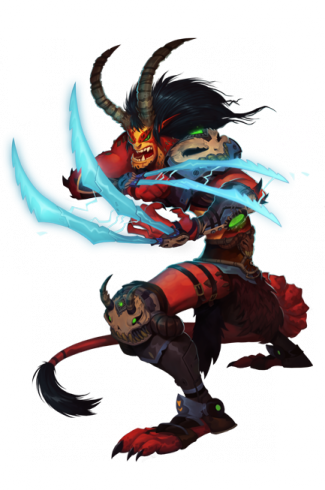 Forged in the heat and dust of their savage homeworld, the Draken have come to Nexus to prove they are the most badass warriors in the galaxy. Eviscerations, disembowelments, and decapitations will definitely be involved.

Three centuries after the founding of the Dominion, the Mechari determined that the Dominion military required new blood. After examining thousands of known species and analyzing their combat effectiveness, they advised the reigning Luminai emperor, Azrion, to bring the Draken of planet Mikros into the Dominion. Unfortunately, the eternal respect and loyalty of these ferocious hunters could only be won through strength and violence.

The empire landed a formidable military force on Mikros in 344 AE, and the Draken hordes amassed for all-out war on the Dominion invaders. Acting upon counsel from the Mechari, the bold Luminai Emperor Azrion issued a challenge to the reigning High Clanlord Zhur: meet him in single combat, with the victor ruling supreme over planet Mikros. As the Mechari expected, Zhur accepted the challenge immediately.

Hours later, they met on the Field of Kazor, a massive gladiatorial arena in the ancient city of Red River. The duel was fierce and brutal, and the swords of the two combatants were soon stained with blood. In the end, the Luminai emperor's skill and training overcame Zhur's ferocity and strength. Upon the death of their leader, the Draken swore eternal loyalty to Azrion the Conqueror and his descendants – and these savage warriors have faithfully served the Dominion ever since.

For the Draken, the journey to Nexus represents the ultimate test. Not only is the fabled planet rumored to be the home of exotic, savage creatures that will test their skills in the hunt, but it is also the front lines of the intensifying war with the Exiles. The reigning emperor Myrcalus the Vindicator has claimed Nexus for the Dominion by right of the Eldan blood that runs in his veins, and the Draken have vowed to help him conquer the planet, regardless of the cost.[1]