From WildStar Wiki
(Redirected from Emperor)
Jump to: navigation, search 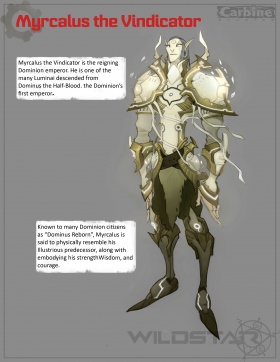 Myrcalus the Vindicator is the reigning Dominion emperor. He is one of the many Luminai descended from Dominus the Half-Blood, the Dominion's first emperor.

Known to many Dominion citizens as "Dominus Reborn", Myrcalus is said to physically resemble his illustrious predecessor, along with embodying his strength, wisdom and courage. At the end of the Dominion Tutorial, the truth is revealed...the Myraculus seen in the games, is nothing more then a holorecording. Information about the true Myraculus is unknown.

Myrcalus took the throne by force after the dark reign of Vorios the False nearly brought the empire to ruin.

In the wake of the discovery of Nexus, Emperor Myrcalus has sworn that he will bring the homeworld of his ancestors under Dominion control, and lead the empire into a radiant new age of galactic supremacy.