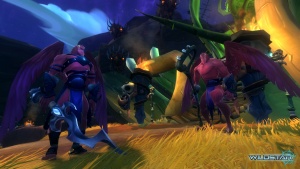 The Falkrin are a fierce race of powerful avian humanoids that dwell in the mountains and cliffs of Deradune on the planet Nexus. Primitive, proud and barbaric, the Falkrin worship the mighty Primeval Osiric; considering him the ultimate manifestation of their strength and spirit. Their origins are shrouded in mystery, but they appear to be native to the planet Nexus.

Male and female Falkrin possess tall, muscular bodies that tower over the average human, and a wingspan that averages three times the length of their bodies. Their wings attach at the shoulder blades, and their hands and feet end in claws. Their features are decided avian, with pointed noses and chins that resemble beaks.

Falkrin live in familial tribes called broods, which usually occupy high-elevation settlements called perches. Perches are ruled by male broodlords, many of whom are advised by the Brides of Osiric. Most perches have a number of structures used for defense and housing. Perch life is usually as unfettered and free as the Falkrin themselves, with a few individuals providing necessary services to the perch (such as hunting for food or standing watch), leaving the rest of the brood to do as they please. Meanwhile, their Murgh cousins take care of most labor needs for the perch.

Broodlords are the leaders of Falkrin perches. They are always male, and are usually the most powerful and most intelligent individuals in the perch. Broodlords rule through strength and intimidation - both necessary qualities when commanding the proud and fierce warriors that make up Falkrin broods. It is not uncommon for broodlords to take on an advisor from the Brides of the Osiric, during especially turbulent times.

The Brides of Osiric are part of an all-female order that provides spiritual guidance to the larger Falkrin community. They are the only individuals who speak directly to Osiric himself, and they make daily visits to his roost to seek his will. The Brides do not rule individual broods or perches, but stand apart as a separate faction that guides the larger Falkrin civilization. The brides maintain the Aviex of Osiric and enforce its laws among the Falkrin broods across the planet. Respect and reverence of the brides is expected by all Falkrin, and any action against them is punishable by death.

The Falkrin often employ their flightless cousins, the Murgh, as willing servants, and many perches are located near Murgh burrows. Murge burrows are usually situated on the ground beneath the perch itself. Most Murgh are not permitted to enter Falkrin perches, but sometimes Murgh burrowbosses are allowed to speak directly with the Falkrin broodlords in order to give reports or make requests.