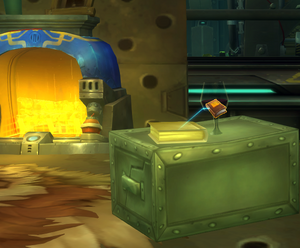 A copy found in the Relic Room

[This book is very old and worn, smelling of ancient paper and faded ink.]

For the galactic explorer, being the first individual to make contact with an alien species can be most exciting endeavor. Indigenous beings should be treated with care until their level of sentience can be determined. If sentient, their culture must also be considered. Seemingly innocuous actions on the part of the explorer can trigger dire consequences, brought on by the unwitting violation of alien taboos and customs.

Many galactic explorers have fallen prey to alien cultures through no great fault of their own. Invitations by such creatures, though seemingly friendly, must be considered carefully before the galactic explorer accepts them at face value. More than one extraterrestrial invitation to dinner has resulted in a galactic explorer being roasted, stewed alive, or eaten raw for the pleasure of his hosts. It is your duty to tread carefully in such circumstances, lest you become a statistic.

Even non-sentient creatures can appear to posses some form of self-awareness and intellect. It cannot be stressed enough that speech and actions alone on the part of an alien creature cannot prove out its intelligence. Unless its sentience can be ascertained beyond a reasonable doubt, no alien species is entitled to rights under the Galactic Explorer's Charter of 1438 AE. As such, they can be displaced, relocated, or simply removed by any means necessary at the emperor's whim.

At the end of the day, the galactic explorer must remember that his purpose is to serve the Cassian Empire in all things. To stake claim to stellar body, be it an asteroid, a moon, or a planet, is to assign ownership of it to the emperor himself. Personal ownership and accomplishment, though hard-won by the successful galactic explorer, are the Emperor's alone to mete out. Remain humble and loyal in your travels, and understand that you are merely one small part of a larger whole.

(Handwritten in new ink are the words: "What tripe! I wonder if Zin's got a copy of this claptrap on her nightstand? - DW")