The Gauntlet is the last shiphand mission you will encounter in WildStar and one of my favorite.

It is available for both faction, Exile and Dominion at level 40.

He made some vague mention of a ship under distress, and you need to help him with his plight by traveling in his beat-up ship into orbit.

The Shiphand is pretty straight forward, you clean one room and proceed to the next trap.

The first room is called “Proving Ground” and is covered by a lot of telegraphs, take your time, they are many safe spot to regen if needed.

After a small corridor, you enter the “Swarm Pit“, 3 waves of creatures will attack you without delay. Prepare yourself before entering the blue circle.

Next is the “Chamber of Choice” or the “Splorg Bomb Room“. Use your dodge wisely. The more the timer runs the more telegraphs there will be.

The end of the Shiphand is pretty classic, big bosses or multiple creatures with some time to regen between waves.

Don’t forget to use the floating cameras, and try the dancing-room !

To get the gold medal, you need to complete these objectives :

Golden Skulls always spawn at random places, but there is always the same amount of skulls in a designated room : 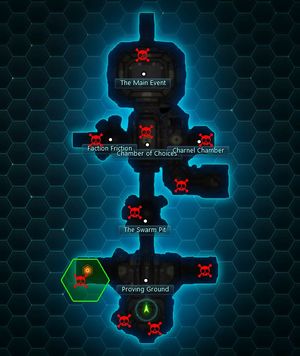