For in-game lore entries see the Granok entry in the Galactic Archives. 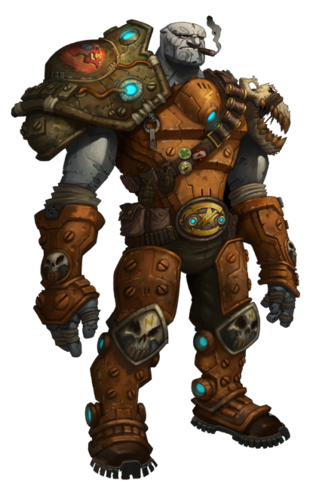 The Granok are from a planet called Gnox. They are a golem-like race of warriors [1] and are a silicon-based sentient species whose bodies are made of dense, living stone. Centuries ago, Granok mercenaries banded together to beat back the mighty Dominion armies that threatened their homeworld. But when the war was over, these battle-hardened mercs were exiled when they refused to stand down and return to their peaceful lives. Joining up with the humans of the Exile Fleet these Granok Exiles eventually decided to sign on to the Exile Accords and join the humans‘ fight against the Dominion. Today, most Granok are battle-tested, hard-drinking mercenaries. They lead the Exile Free Companies, which serve as the de facto Exile military, but — will still work for anyone in the galaxy willing to meet their standards and pay their price - in other words, no Dominion need apply.

A video explaining the Granok race in Wildstar made by the Curse Gamepedia YouTube Channel.

Granok males and females average three meters in height and display exaggerated sexual dimorphism. As their bodies are made of living stone, they generally appear fit and muscular no matter their age.

The Granok homeworld is the planet Gnox, located near the galactic core world Cassus. This proximity was one reason the Dominion attempted to conquer the planet hundreds of years earlier, while the resilience and fighting spirit of the Granok themselves are one of the main reasons they failed.

Life on Gnox evolved from silicon-based organisms, including analogs of more typical carbon-based birds, fish, reptiles, and insects - and like the Granok, these creatures are colloquially said to be made of "living stone."

Several hundred years ago, Granok civilization on planet Gnox was fairly primitive. With only the most rudimentary levels of technology, the Granok lived in small, isolated tribes scattered across the surface of their homeworld, following a simple, stoic philosophy known as the Way of Stone. The tenets of this philosophy were simple - the world might shift around them, but the Granok were as immutable and unchanging as the living stone from which their bodies were hewn. So it had been for tens of thousands of years, and so it would ever be.

Their lives were relatively simple and uncomplicated. They grew crops, crafted armor and weapons, and heartily enjoyed the brewing and drinking of beer. They were skilled warriors, but not warmongers. If they fought each other, it was more than likely in a good-natured tavern brawl where both combatants laughed if off with a hand shake and a peace offering of a newly filled tankard. They had what they needed on Gnox, and it was on Gnox they were going to stay.

Until the Dominion arrived.

Seeing great potential in the Granok’s size and strength, the Dominion sent mechanical ambassadors to Gnox to facilitate their assimilation into the empire. They offered the Granok tribal chieftains gifts of knowledge and technology, asking only that they kneel and swear eternal loyalty to the reigning Dominion emperor in return.

Enraged by the insolence of these mechanical beings, the chieftains and their warlords immediately refused, making it abundantly clear that the ambassadors should leave their planet and never return. When the ambassadors suggested it would be in their best interests to reconsider, the Granok answered by smashing them into smoking piles of scrap.

Within a few hours, the emperor received news of his ambassadors' demise. Infuriated, he decreed the Granok were a dangerous, uncontrollable race that should be eliminated for the good of the empire. War was declared on planet Gnox, and the mighty Dominion Legions were deployed from planet Cassus.

The Dominion arrived on Gnox in overwhelming force, assuming they would quickly eradicate the Granok tribes. But the empire severely underestimated the resiliency of the Granok warriors. Although their weapons were primitive, they were fearless and unrelenting on the field of battle - and their war machines were sturdily built and surprisingly destructive.

The war dragged on for months, with both sides taking heavy casualties - but soon the superior technology and weaponry of the Dominion began to win out over the powerful, yet primitive armaments of the Granok warriors. Unfazed, the tribal chiefs stoically accepted their imminent death, proud that they had walked the Way of Stone until the bitter end.

However, there were some amongst the Granok who disagreed with the chieftains. A young warlord named Durek refused to accept death and defeat, believing that the Granok were capable of defeating these alien invaders. In a series of daring raids, Durek led war parties into Dominion camps, stealing weapons, armor, and other powerful military technology. Within a few weeks, the growing ranks of Granok insurgents began to turn the tide, using the confiscated Dominion weaponry to win a number of key battles. Without the advantage of superior technology, the Dominion soon found themselves on the losing side of the war. Battered and bloody, the Legions were eventually driven off Gnox and back to planet Cassus.

After the war ended, Durek and his followers returned victorious to their tribes, armed to the teeth with Dominion weaponry. But instead of being greeted as heroes, they were met with coldness and hostility by the Granok chieftains, who regarded their use of Dominion technology as a betrayal of the Way of Stone. Durek was branded as the Stonebreaker, and his host of brave, battle-hardened warriors were exiled forever from planet Gnox.

Using the Dominion spacecraft they had captured, Durek Stonebreaker and his followers took to the stars. Forming into loosely structured Free Companies, they began to ply their trade as off-world mercenaries, making a name for themselves as tough, relentless fighters who could be counted on as long as the price was right. As they traveled the galaxy as soldiers of fortune, the Free Companies retained a deep-seated hatred for the Dominion and looked forward to the day when they could settle the score in blood.[2]

The Granok are devided into seven tribes known as the Stone Nations[3]. An overview of these nations can be found below.

The Granok of the Bloodshard Nation pride themselves as thoughtful warriors. As a nation, they never act rashly or out of turn. Though other nations consider them to be reactionary, a Bloodshard defense has never been overcome and they were the only nation to never lose a hold to the Dominion during the War of Gnox.

Fiery and passionate like the lands they choose the live in, the Cindercrag believe their ancestors were forged in the molten core of Gnox. They tend to act impulsively when roused, though their rash actions are often preceded by extensive rumination on the wrongs they’ve suffered and the justices they will ultimately mete out. Judge Kain was a member of the Cindercrag Nation before being exiled from Gnox.

If there’s a Granok nation that can be considered jovial and optimistic, especially when compared to its sibling nations, it is the Claymantle. These affable Granok prefer to dwell in lands where the ground is soft and water is plentiful, and they are always celebrating something. Even as they suffered tremendous losses during the War of Gnox, their confidence never wavered, and they buoyed the morale of their comrades in arms to great effect.

Second only to the Grimrock Nation in size and population, the Deepore Granok prefer to live in and beneath the northern mountains of Gnox. They are miners and metalsmiths, and their weapons are some of the finest arms available on the planet. Deepore swords, the metal of their blades folded thousands of times, are prized above all others by Granok warriors.

As the largest of the Granok nations, the Grimrock led the charge against the Dominion during the War of Gnox. They are also bound heavily by Granok tradition, including the Way of Stone, and are zealous in their enforcement of the ancient laws. Durek Stonebreaker was a member of the Grimrock Nation until he and his mercenaries were exiled from Gnox.

The smallest of the Granok nations is that of the Ironshale. Despite their relatively small population, the Ironshale are some of the fiercest warriors on Gnox. Had the war against the Dominion gone on much longer, the entirety of the Ironshale Nation might have faced destruction through attrition. Members of the nation prefer to dwell in southern woodlands and tundra, and they make excellent hunters.

The nomadic Sandwaste Nation is comprised of numerous Granok clans that endlessly wander the deserts of Gnox. They are famously insular, rarely associating with others – including other Granok – unless it is to trade or make war. Despite being aloof, the Sandwaste Nation rose to zealously defend their planet against the Dominion attackers during the War of Gnox.