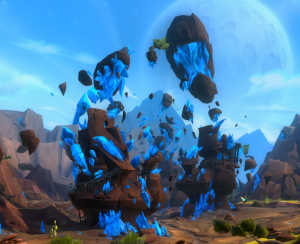 Loftite is a very unique substance found only on planet Nexus, and most abundantly in the mountainous regions of western and central Algoroc. Growing in large crystalline structures hued in various shades of blue, loftite can be found both above and below ground--and a recent spike in demand for the substance has attracted large intergalactic corporations hoping to increase their profits, as well as individual prospectors looking to strike it rich.

It is the unique properties of loftite that make it so valuable. Through a natural process that is not yet completely understood, loftite is infused with high levels of primal air. The result is a significant decrease in the local gravity of itself and other objects within close proximity--literally making them as light as air itself. Scientifically, this fact is both fascinating and astounding, making loftite one of the most closely studied substances in the galaxy.

The practical applications of such a naturally occurring substance are almost limitless--everything from low-energy propulsion systems to advanced military weapons development. Such projects are already underway by both the Dominion and the Exiles, thus creating the demand for the substance which has made Algoroc a very popular location.

As crystals grow in size, so does their anti-gravitational force--and therefore larger chunks of the substance are often found floating high above the ground. If these floating chunks are located on flat terrain, the collection process is relatively simple. An individual only needs to jump up into the air and grab the floating crystal.

But many of the most abundant sources of loftite are located in more vertical, mountainous territory, and such locations present unique-- and sometimes dangerous-- challenges for prospectors. The cliffs located near the mining camp of Tremor Ridge are a good example. The intense concentration of loftite in these cliffs plays havoc with the propulsion and navigational systems of most ships, and so prospectors are forced to collect the floating crystals one at a time by hand--jumping from one rocky outcropping to another. As the prospectors are also affected by proximity to the substance, these jumps can often take them more than a hundred meters into the air.

Although this experience can be exhilarating, it can also be very dangerous. More than one inexperienced prospector has jumped too far out from the cliffs while collecting the alluring blue crystals, leaving the anti-gravitational safety zone and falling to ignominious death.

In a few rare cases, subterranean loftite crystals have grown to enormous size--and those located near to the surface have burst through the ground in a spectacular display of dynamic geography. The best known examples of this phenomenon are known as the Crystal Shards--located in the wilds of southwestern Algoroc.

These two pillar-like structures rise hundreds of meters into the air, composed of massive loftite crystals and the rocks and earth that still cling to them. A number of trees have grown on the various outcroppings of the Shards, their roots finding purchase in the soil that still exists there.

Disagreements about ownership--as well as the sheer size of the crystals themselves--have made harvesting these sources difficult, and as a result the Shards have grown into a popular location for both scientists and sightseers. There is also a growing subculture of explorers and other daredevils who view the Shards as a mountaineering challenge--using a combination of their skills and the physical properties of the massive crystals to try and attain their summits.[1]

The most noteworthy and strange quality in loftite is the mineral's ability to affect local gravitational fields. High concentrations of loftite can, in fact cause such strong gravitational distortions that anyone in the immediate area can perform amazing leaps, pull off stunning acrobatics, and cause horrifying accidents. The Eldan have attributed this phenomenon to the large levels of primal air infused within the mineral, though specifics have yet to be researched by Exile and Dominion scientists.

Prolonged exposure to loftite has been shown to cause physical mutations over generations, however this seems to only affect certain creatures.[2]

The purest form of loftite is purple, while unrefined loftite is a lighter, bluish color. Pure loftite is usually quite dense and heavy, while the impure variety is brittle and breaks easily. Because of the unique properties of this substance, the Dominion, the Exiles, and neutral factions like the Protostar Corporation have established loftite mining operations on the planet.

In some regions of Nexus, such as Algoroc, loftite is so plentiful it actually floats in the air, waiting to be gathered for other uses. The most valuable and pure loftite, however, must be extracted from the ground like most other minerals. Although they have only been on the planet for a short time, miners on both sides of the war - as well as neutral corporations like Protostar - have profited handsomely from the loftite trade. The mineral has become so valued that Marauders seek out loftite mining communities for sacking and pillage.