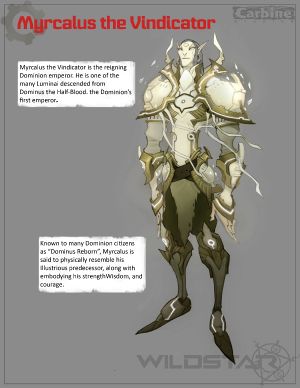 The Luminai are unique Eldan-human hybrids that occupy the highest positions of nobility within the Dominion, set apart from the other races of the empire by the Eldan blood in their veins. Every Luminai is descended directly from Dominus the Half-Blood - first emperor of the Dominion - and are considered by many to be the living proof of the Eldan legacy granted to the empire almost two thousand years ago.

Luminai resemble tall, powerful, idealized versions of their human cousins, but with facial features that clearly delineate their alien ancestry. Often dressed in ornate robes and wearing ornamental masks, they are a formidable and intimidating presence when seen in public.

Luminai resemble tall, powerful, idealized versions of their human forebearers. Aside from greater physical stature and atypically pale complexions ranging from marble white to light blue in tone, the most notable difference between the Luminai and Cassian humans are their long, pointed ears.

The Luminai descendants of Dominus rule the Dominion, both as emperors and the noble class. Luminai power and influence has increased significantly on the planet Nexus, where their origins are on striking display for all citizens to see.

The first and most famous of all the Luminai was Dominus the Half-Blood, who arrived on planet Cassus in the year 1 AE. Dominus was created by the Eldan on planet Nexus, using the genetic information of the famed Cassian Sword-Maiden Tresayne Toria. After his long-awaited arrival, Dominus was welcomed with open arms by his new people and crowned the first emperor of the newly established Dominion. Blessed with the strength and courageousness of his legendary mother, the Half-Blood was beloved by the people of Cassus, and his reign is considered the Dominion's golden age.

Like most Luminai after him, Dominus was extremely long lived and ruled the Dominion for almost three centuries. He died peacefully in the year 292 AE, leaving the empire to his firstborn son Azrion. The other children of Dominus - now known as the Scions - founded the Great Houses of the Luminai and helped their brother lead the Dominion into the future.

In 1376 AE, in the wake of the Eldan's purported ascension to godhood, the reigning emperor Jarec of House Azrion delivered the Vigilant Declaration. This document, which officially deified the Eldan, united the empire under one faith. It also included the Ancestral Decree, a set of laws meant to preserve the Luminai's sacred Eldan blood of the Luminai. This decree also established a set of rules for Luminai marriages and reproduction within and between the Great Houses, all of which are still followed to this day.

The controversial Vigilant Declaration also led to an unexpected class and racial dispute between highborn and lowborn Cassians. Highborn Cassians were those who could trace their lineage to the one or more of the Great Luminai houses, and therefore had trace amounts of Eldan blood in their veins. Lowborn Cassians could not. This divide among Cassian humans still exists today, and continues to serve as the foundation many Dominion social and political systems.

Despite their nearly unchecked power within the Dominion, the Luminai are a relatively small population of individuals who are rarely seen beyond the confines of their family houses. Considered by many to be deities themselves, and surrounded by unimaginable wealth and power, the Luminai exist in a realm undreamed of by most Dominion citizens.

Like any exclusive and isolated group that maintains frequent contact, they have developed their own ways of communicating and interacting with each other. These include formalities and rituals observed in public and in private, phrases and gestures known only to them, and of course the ongoing struggle to gain wealth, power and influence. As would be expected, the struggles between the Great Houses can often be deadly, often involving deception, machinations and murder.

The current emperor, Myrcalus the Vindicator, took the throne by force after the dark reign of Vorios the False nearly brought the empire to ruin. To many in the Dominion, he is known as "Dominus Reborn". His physical resemblance to Dominus is undeniable, and many also believe he possesses the same strength, courage and indomitable spirit as his illustrious ancestor. In the wake of the discovery of Nexus, Emperor Myrcalus has sworn that he will bring the homeworld of his ancestors under Dominion control, and lead the empire into a radiant new age of galactic supremacy.