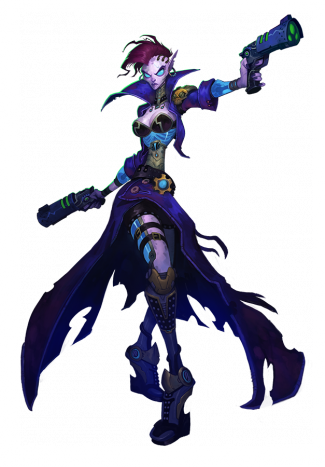 A video explaining the Mordesh race in Wildstar made by the Curse Gamepedia YouTube Channel.

Cursed with a degenerative disease after delving into the forbidden secrets of alchemy, the Mordesh have come to Nexus to find a cure. Being a space zombie can be complicated. Unleashing dark and deadly disciplines on the Dominion? Much simpler.[1]

Until the last century, the Mordesh of planet Grismara had a flourishing civilization whose refinements in alchemy made them the envy of the galaxy. Having attracted the attention of the Dominion and been invited to join, their ongoing success was all but inevitable.

In 1578 AE, Victor Lazarin, widely acknowledged as the greatest alchemist in Grismaran history, announced his creation of the Everlife Elixir - a substance he claimed granted immortality. The Mordesh were convinced of Lazarin's brilliance, and the elixir was distributed worldwide. Yet cries of rejoicing soon turned to moans of despair. The elixir eventually became unstable, leading to necromantic physical degeneration coupled with a mindless cannibalistic rage.

It is said that in the Contagion’s first outbreaks, the casualties mounted too swiftly to be measured. The only certainty was that a civilization of billions lay within a hairsbreadth of extinction after just a few weeks. The Dominion response was a brutal and uncompromising quarantine, while below the Mordesh suffered and perished. While almost falling into the Contagion's madness himself, Lazarin created a temporary therapeutic treatment known as the Vitalus Serum. Despite failing to cure the disease, the serum suppressed its psychological symptoms and saved the few remaining Mordesh survivors.

In desperation, the Mordesh turned to the Exiles, who smuggled them piecemeal through the Dominion blockade. Forced by dwindling numbers and their hunted status to become practitioners of artifice and deception, they formed a covert intelligence group, the Black Hoods, to wage campaigns of sabotage and assassination against their enemies. Seen by the Exiles as an unsavory but necessary evil, the Mordesh now ply their dark arts on Nexus in hopes of finding a cure and wreaking vengeance on the Dominion who deserted them.[2]

For more, see the Galactic Archives. 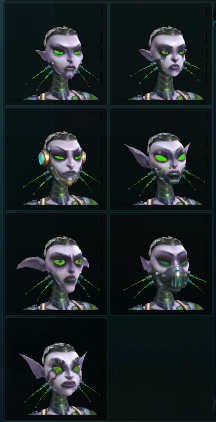 Before the Fall, Mordesh were presumed to have had skin colours, and hair very similar to humans. They were also very elf-like, being very tall, thin and elegant, with pointed ears. A picture of Dr. Victor Lazarin before the contagion shows him with light skin and black hair.

After the Fall and the ravages of the Contagion, Mordesh have a variety of sickly, pale, rotting skin, from blues, purples, greens, and even pinks. What little hair they have left is sparse, or replaced completely with mechanical decorations. Some Mordesh retain their original eyes, though most now have optic replacements; both take on the colour of their Vitalus serum.

One of the most striking features of the Mordesh are their mechanical body parts, usually filled with Vitalus serum or replacing a section that has completely rotted away. Though facial decorations may differ, a Mordesh will always have robotic parts at: their necks, shoulders forearms, the outside of their thighs, and the upper chest.

As a result of their rotting internals, all Mordesh speak with a gravely voice filtered through a voice modulator. They sound very similar to the Mechari.

→ See more about styles in the gallery below!

Interestingly, the Contagion does not stop the natural development of a child. After an infected Mordesh reaches adulthood, all development stops, so a 5 year old during the Fall of Grismara will have the body and mind of an adult today. Similarly, any Mordesh in the later stages of life will have reverted to the age and physical appearance of a young adult, somewhere in the mid-twenties.

In spite of their immortality, Mordesh still need food and drink to operate properly. Though they are robbed of the pleasures of taste, they still feel the gnawing pangs of hunger.

In spite of 80 or so years of living on the Exile fleet, the destruction of their entire civilization, and the ravages of the Contagion, Mordesh remain sophisticated and elegant. Their quiet, reserved demeanor are at a stark contrast to their chipper, active, and energetic allies. For example, a human wave is vigorously waving their entire arm high above their shoulder, a Mordesh wave would be slightly raising the hand just above the elbow and waving with just the fingers.

The tragedy that has befallen them has adversely affected their outlook on life, however. Rarely will you meet a Mordesh who is not dark, dour, and depressed.

Another unique trait of their speech is that it is almost always alliterative. There's a lovely lyrical lilt when a Mordesh speaks.

Mordesh names have a distinctly Eastern European vibe to them. It is also often said that they sound Russian.

The Contagion is essentially every single disease on Grismara, mutated and now made immortal by the Everlife Elixir. Its primary effect is causing the rapid decay of the victim's body, which leads to the deterioration of the mind that causes it to revert to the most primal of states: eat and kill.

Mordesh who have fully succumbed to the Contagion are called Ravenous, so called for their unceasing hunger for flesh and violence. A Ravenous is beyond saving; they will attack and destroy anything within their sights, and must be put down, then burned or exposed to the acidic Mortalus to destroy the remnants of Contagion.

A large population turning Ravenous en-masse has an adverse effect on the immediate environment. With no Vitalus to slow the decay, the air frequently becomes thick with the smell of death and decay, becoming poisonous and lethal to those without a working hazmat suit and fresh air filters.

One of the most important resources to the Exiles, Vitalus serum temporarily suspends the effects of the Contagion, allowing the Mordesh a limited period of sanity and clear thought. It is very difficult and expensive to make, especially because of one of its most important ingredients, pure Primal Life.

Mordesh oftentimes change and refill their Vitalus as part of their daily routine. Should they run out, they have about 10-20 minutes before they turn Ravenous.

The Alchemist Guild has the hardware and expertise to refill a Mordesh's Vitalus. The procedure involves emptying the tanks and replacing the liquid. The old liquid is then disposed of, usually burned.