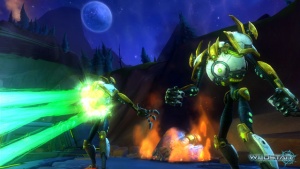 Protectors are large humanoid Eldan constructs that have been encountered at a number of different archaeological sites on Nexus. Intimidating in their size and strength, these powerful machines are most usually deployed as security measures by long-dormant Eldan scientific facilities, displaying a single-minded focus on protecting the valuable scientific data and equipment found within them.

Although specific records concerning their construction have been difficult to find, Protectors have obviously been engineered with combat in mind. Their bodies display the simple elegancy of Eldan technological design, armored in a blast-proof metal alloy that allows the construct to withstand considerable amounts of damage when engaged in hostilities. Weapons systems are equally impressive. The reinforced humanoid combat chassis is capable of powerful melee attacks, and its torso houses multiple weapon modifications--including an embedded array of highly-destructive plasmic projectiles.

SECRET SCIENTIFIC ARCHIVES: Like many Eldan creations, the Protector displays advanced intelligence, utilizing a quantum neural matrix that allows it to simulate billions of combat scenarios per millisecond. Protectors also receive instantaneous field data from any Eldan Probes in the immediate vicinity, allowing them to formulate multi-layered strategy while in the midst of conflict.[1]