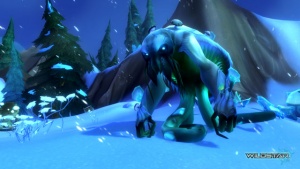 Rootbrutes are a species of ambulatory plant-animal hybrids that are unique to the planet Nexus. Resembling tall mushrooms, they walk on a set of three to six rigid tentacles. They spend most of their time partially embedded in the earth like plants do, but when necessary for survival they can easily uproot themselves and move about with surprising agility.

Rootbrutes are omnivorous and will attempt to eat almost anything that moves. They generally dwell in overgrown areas of Nexus where their natural camouflage helps conceal their true nature - atleast until their tentacles erupt from the soil and impale their unwary victims.

SPECIAL ATTACK: Rootbrutes use their tentacles to attack, thrusting them into the ground beneath their victims and then impaling them from underneath.

It is unknown how the rootbrute species developed both plant and animal characteristics, though the two strongest possibilities are ancient genetic experimentation or a simple - quirk of evolution. However the species came to be, scientists believe rootbrutes have no genetic relationship to any other known creature on Nexus.

Scans indicate the local rootbrute population has come into conflict with herbivorous creatures not usually considered meat-eaters. It appears that many of the herbivorous species found on Nexus are willing to turn predator in order to hunt down edible funguses even if they move about on fibrous tentacles.

A variety of the hybrid plant-animal creatures known as rootbrutes found in the Deradune region of Nexus, the so-called Grove Stranglers demonstrate many unique traits and behaviors that mark them as a distinct subspecies. Scans show a wide genetic variation between Grove Stranglers and ordinary rootbrutes, and hunting techniques in particular are quite varied. Unlike their more common cousins, for example, Grove Stranglers (as the name implied) often employ their tentacles to asphyxiate their prey.