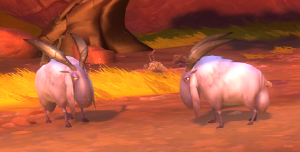 Two Rowsdowers in their natural habitat

A common species of ungulate found on many worlds in both wild and domesticated varieties, rowsdowers are a source of meat, hides, and wool for many species. Rowsdower ranching is common in almost every galactic culture that engages in animal husbandry, and on Nexus rowsdowers provide a safe and plentiful source of raw materials that could be too dangerous to harvest otherwise They are not known for their intelligence.

“
The origin of the name 'rowsdower' has been lost to history, although many hypotheses have been proposed.

The word appears to have no linguistic connection to either ancient or modern Cassian, or indeed any other known language still in use. Phonetically, it resembles certain syllables of ancient Bezgelorian, yet Bezgelor is one of the few worlds with little to no rowsdower population. The leading theory among language scholars - most of whom, to be clear, don't care all that much - is that the word was a proper human name, one associated with an individual who spenta great deal of time among these gentle, if

Typical rowsdowers are about the size of a large dagun, although much of the apparent bulk is due to long, wooly fur that rowsdower ranchers shear and sell on a semiannual basis. They have long faces, and males tend to grow long horns used in mating displays. A freshly shorn rowsdower is nearly unrecognizable, resembling a hairless canine with hooves - but rowsdower wool grows at a prodigious rate, making this a rare sight even on rowsdower ranches.

Despite their large populations on Nexus, their ubiquity on other agricultural worlds, and Cassian humans' long history of domesticating and breeding these hardy ungulates, rowsdower husbandry is still an imprecise and sometimes frustrating science. One largely unheralded element of properly setting the right mood for mating rowsdowers is the creation of sympathetic vibrations - this is the reason rowsdower ranchers often sing to their herds at matting season.