“
Listen, lady, I'm just here to do my job, not join the Flower Patrol.

Sarge is the security for Research Team Alpha, a trio composed of himself, Liara, and Buck Wanderbeck. A no-nonsense, tough-talking Granok with a personality as hard as his skin, he aims to kick ass, drink beer, and get paid.

He makes his first appearance in the official Blur trailer.

Like all Granok, Sarge is covered in a thick, rocky skin with tribal symbols carved into the surface. He has the Granok version of a bald head, very thick "eyebrows," and a square jaw. He has yellowish eyes.

His outfit, like most Exile equipment, is obviously pieced together from many sources. The most obvious of this would be his left shoulder-guard, which is an animal's skull strapped to his arm. His armour also looks battered and dented up close, a combination of the usual rough and tumble life of a Granok and the less than ideal maintenance available to the Exiles. There are also numerous bandages and strips of cloth holding some sections together, like his right shoulder-guard.

As a testament to his love of explosives, there are quite a few grenades strapped to his person.

Sarge is about as stereotypical as you can get for a Granok: a skull-cracker for hire, working to pay off his fuel, weapons, and explosives bills, and of course, leave some for beer after a hard day's work.

He has little regard for anything but the most basic aspects of his job, as evidenced by his using valuable Nexian flora as target practice for his turrets. (Sarge claims he is just "securing the perimeter.") When his co-worker Liara admonishes him for it, he replies "Look, lady, I'm just here to do my job, not join the flower patrol."

In spite of all this, he seems to have a soft spot for Liara. She claims he's really just "a big softy inside," though it's really not recommended to say that to his face.

He has a more open love of weapons and tools of destruction. Aside from his vast collection of armaments, he has named his favourite sword "Blue."

As with Liara, Sarge does not think very highly of Buck, mostly because the Explorer has a tendency to run off his mouth all the time. He does admit that he is useful in a scrape, though more often than not, the Spellslinger was the one who had gotten into it in the first place.

Sarge seems to care quite a lot for Liara, based on what she says. Sarge will never admit to it, however, and what he does say is that despite his dislike of the Aurin's overemotional tendencies, he appreciates that she can kick ass when the chips are down. 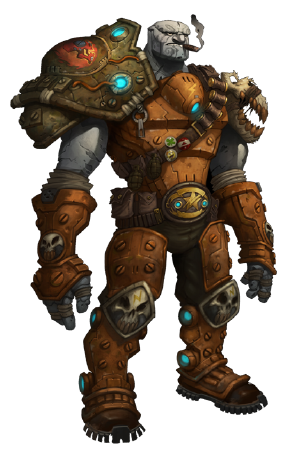