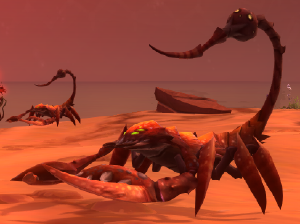 The giant arachnoid creatures commonly called scrab are some of the most vicious pack hunters on Nexus. They can often be found in dry, hot regions of the planet, and resemble scorpions the size of a Draken. They have limited individual intelligence, but display predatory cuning their victims underestimate. Scrab have some physical similarities, but no close genetic relationship to, the giant spiders of Nexus. They are sometimes found in the same areas, hunting the same prey.

Scrab, like the Draken, originate on the planet Mikros. All scrab now on Nexus are descended from a small number of breeding pairs brought to the planet to serve as prey in the Great Hunt. A few of those scrab survived and turned feral, where they prospered. In just a few years the creatures have spread all over the planet, evolving quickly into several distinct subspecies.