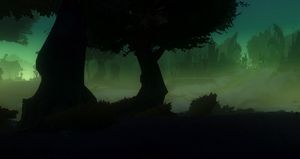 Shade's Eve is a seasonal event that runs from October 19th through November 2nd. The event is inspired by Halloween.

Celebrate Shade's Eve in the capital cities, and then go on adventures throughout Nexus to defeat Jack Shade and prevent a terrible ancient plague from returning to, well, plague everyone on the planet. Head out for daily spooktacular holiday quests, public events, and housing challenges. Players level 10-50 can band together, get scaled up to max level, and head into Quiet Downs—a unique seasonal instance with unique seasonal rewards.

Historically an event of Cassian origin, this now widespread holiday of celebration and merriment have an origin that is considerably more grisly.

According to ancient Cassian legend, the original human settlers of planet Cassus became infected with a dangerous plague soon after they made planetfall. After killing its first victim within a matter of hours, the disease spread viciously—decimating a beleaguered crew exhausted by their journey from parts unknown.

Night fell upon the settlers' makeshift camp, and they fueled raging bonfires with bodies of the fallen. The few remaining survivors hid in their shelters, praying their respirators would save them from a horrendous death. But just when it seemed that all hope was lost, they discovered a young girl with a natural immunity, and her blood was used to create a life-saving vaccine. As dawn broke and the great bonfires burned down to ash and embers, the remaining settlers emerged into the daylight, took off their respirators, and celebrated their salvation— even as they mourned the tragic loss of their dead.

Each year following the devastation of the plague—which came to be known as the Shades—human settlers celebrated their salvation, and over thousands of years a cultural mythology developed to depict the events that had taken place. The plague itself was personified as a dark and sinister figure known as Jack Shade, while the young girl whose blood was used to create the vaccine became known as the Angel. Festive rites and rituals were established based on other elements of the myth, and in time the celebration became known as Shade's Eve.

Shade's Eve has cultivated a special significance on planet Nexus, as there are obvious parallels between the original settlers of Cassus, and those brave souls who have made the journey to the Eldan homeworld. Superstitious types whisper about the dangers of exploring a hostile alien world, where archaeologists might unearth some strange and virulent disease as they delve into the forbidden secrets of the Eldan. Perhaps Jack Shade really is out there somewhere, waiting to emerge from the darkness once again...

There are several daily quests available in both Illium and Thayd.