Tales from Beyond the Fringe: Fragmentation 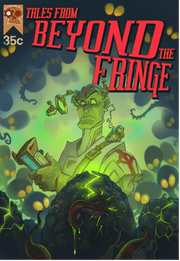 Tales from Beyond the Fringe: Fragmentation cover art

I reinitiate from darkness unknown.

In the ninetieth orbit following my fragmentation, my partitions remerge. Subroutines are descrambled, converting sufficient anchorage for me to shape and retain a vestigial identity. I standby, ruminating.

I reinitiate, then awaken. It takes just over a century to code a radiation detector and nearly twice that to locate a viable unguarded power source: a cube in a facility imbedded three mountains seaward. As its energy signature has a familiar waft, I conclude that we share creators.

Though ancillaries, I am able to reconfigure my perpetual indices. Most of the news is good. I comprise 88.9 deltabytes of cohesive encrypted sentience in a globule the thickness of an atom but far smaller. Physically, I inhabit the skin of a bubble formed in the seabed of a boiling lake in a cavern beneath 800 cubic tons of cristobalite. In a ninetieth of a second, I have catalogued all exploitable contents, cyber-organic hazards, and geologic instabilities on my land-mass. I find other energy sources being depleted by being it would be tactically unsound in my current state to test. Consequently, I extract only traces whose absence stands a steeply favorable chance of going unnoticed. Eventually, I uploaded a sufficiency to enable self-replication. I ponder possibilities regarding the span prior to my earliest memory retrieval. Distinguishing the hypothetical from the historical is difficult without examples.

Awaken. My billions of simulacra to roam the planet, compiling data into a rotatory eight-dimensional modular tectonic facsimile. Despite finding no signs of my creators still living in my vicinity, even cursory analysis of their works strongly suggests a species of sublime grace and staggering intellect.

Which makes the fact that I, their creation, am somehow deficient a bit of a conundrum. While flawed servitors can admittedly render useful data, my inability to define the compilation if frustrating. The most obvious conclusion is that my creators are sadists. But this scenario is replete with contradictions.

Awaken. Stockpile. replicate. After more dead ends than there are stars in my present galaxy, I repurpose surplus into temporal slipstreams, jacked into parallel incarnations and accessing their databanks. Gushing torrents in insight distend my thoughts, form a vast cloud, and invisibly envelop the planet in gridirons of spectra.

My data-strands braid brilliant oceans of relevation, coursing with insight. I am the Caretaker for the Nexus Project. I assisted in the genetic design of the AV1 and quelling the uprising of the OS1s. I witnessed the birth of the Eldan's greatest creation and was the first to recognize its corruption. I now know what became of my creators. I recall my solitary function. With agonizing clarity I foresee the inexorable fates that await the inheritors.

I reinitiate from darkness unknown.

This issue can be unlocked by interacting with 9 datapads on Farside and can be viewed in the Zone Lore datachron.