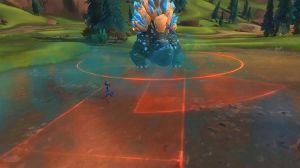 Telegraphs have undergone many changes through the development of Wildstar, and this article was written during the Open Beta. Be aware that the mechanics of telegraphs may have changed.

Telegraphs are some of the most visible innovations in Wildstar, and are a primary combat mechanic in the game. The majority of player character skills in Wildstar are telegraphs, including heals, and most (if not all) mobs have telegraph attacks. This adds challenge to gameplay by requiring players to aim their own telegraph attacks while dodging enemy telegraphs.

Who the telegraph belongs to is denoted by color: blue for the player's own telegraphs, red for enemy telegraphs, and green for ally telegraphs. However, there are different colorblind options available through the system menu. Sometimes the use of these colorblind options might be advisable by non-colorblind people due to the color of the floor in certain dungeons (a red telegraph on red floor is hard to see).

A telegraph that has a moving line that moves away from the caster will only have an effect once the cast time ends. This means you won't take damage while standing inside an enemy telegraph until the spell ends, but you will once it does.

A telegraph with a moving line that moves toward the caster has an effect until the spell ends. This means you will get healed while standing inside an ally telegraph. Additionally, telegraphs without a moving line are continuous effect, and have no visible time limit.

As of 7 May 2014, continuous effect telegraphs cannot be jumped over or tumbled through without taking damage.

The dev team released a couple of videos related to telegraphs (as they were implemented at various stages in the beta):