Walatiki Temple is a 10v10 modified Capture the Flag (CtF) battleground--instead of invading the enemy's base and stealing their flag, a neutral flag (represented by a golden Moodie Mask) will spawn in the center of the map. Teams must capture this mask and bring it safely back to their base. First to reach 5 captured masks wins.

Complicating matters is that opposing teams can sneak into your base and steal masks you've already captured, which means you will have to focus on offense (capturing flags) and defense (guarding the base, chasing down mask thieves) at the same time. 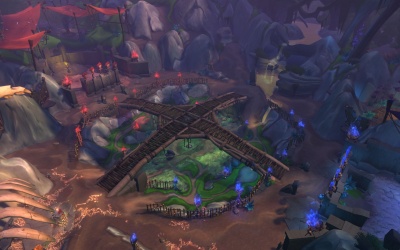 Walatiki temple takes place in a circular arena, a bowl in the middle, a cross-shaped bridge over the bowl, and caves which can be used to access the middle of the map without taking the bridge.

The teams' bases are directly facing each other, and are differentiated by coloured torches along the walls--Blue for the Exiles, Red for the Dominion. Each base has two opening in the arena wall, and also a cave passage leading further away.