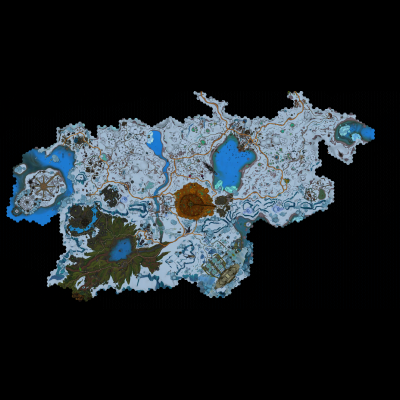 Whitevale is a region located on the Alizar continent of Nexus.

[EXILE SIDE] Once you turn level 22 you can gain access to this zone by venturing into Thayd to click the Venture Board, this will give you a quest that will furthe take you to Whitevale.

[DOMINION SIDE] Once you turn level 22 you can gain access to this zone by venturing into Illium to click the Venture Board, this will give you a quest that will further take you to Whitevale.

Whitevale sits in a temperate region of Nexus that should not be able to support the frigid climate that smothers the disputed territory - and in fact, much evidence has been found indicating that the average temperatures in Whitevale fluctuate wildly, from frigid to tropical, every few decades. The bizarre weather in Whitevale is one of its greatest mysteries, and could be related to the Focus of Water - the gargantuan Eldan artifact that hovers over the southern end of Whitevale where it generates massive amounts of primal power. Both the Exiles and Dominion have staked out their own safe havens in Whitevale - Sunderstone Hold and Palerock Post, respectively - but neither has been successful in securing control of the rest of the area, which is filled with clever Lopp, dangerous outlaws, and creatures that have successfully adapted to the unnaturally frozen temperatures.

"Wait, so you're sayin' this whole place only got buried in snow recent-like? Then why do they call it 'Whitevale?' What was it covered in before - sugar?"
--Belle Walker, XAS

"We have strong evidence that the Focus of Water has been damaged somehow. For is ice not water in another form? Until the Focus can somehow be repaired, however, we will be stuck here making deals with outlaws. It is unfortunate that annihilating this site from orbit is not an option."
--Infiltrator Carcus, ICI

The Dominion and the Exiles have fought each other to a stalemate in frigid Whitevale. A combination of inclement weather, encroaching Marauders, deadly beasts, and military resources focused on nearby Galeras has made settling the area especially difficult, with each faction staring the other down but unable to seize complete control. Instead, the Exiles and Dominion have fortified their safe havens and now attempt to forge alliances with local inhabitants such as the Lopp. Both sides with to turn their loyalties and help take full control of Whitevale, but their efforts have, so far, merely resulted in happy, spoiled, and entitled Lopp.

Whitevale's climate was not always so bitterly cold. This is not mere speculation, scientific analysis and the inhabitants themselves - the Lopp - agree that Whitevale has occasionally been a warm, fertile land awash in sunlight and pleasant seasonal rains. Plants that grew nowhere else on Nexus were abundant there, and the native fauna was similar in many ways to the creatures of Deradune. In the short time since the climate has been radically altered, the creatures of Whitevale appear to have adapted at a staggering rate. Clearly some other force is at work, and most researchers point to the nearby Focus of Water. Instability in the Focus could certainly cause wild fluctuations in the local climate every few years.

The Dominion settlement of Palerock Post is a heavily fortified town on the edge of Whitevale, securely located on lands controlled by the emperor's forces. The soldiers of the Gold Legion are currently posted there, keeping watch over settlers and other citizens and ensuring their defenses never waver despite a large Exile presence sharing the region.

A slap in the face to loyal Dominion citizens in Whitevale, Sunderstone Hold is a small Exile outpost actually situated within the boundaries of imperial territory. The inhabitants are generally considered criminals, outcasts, and others who aren't even suitable for living with other Exiles - but there are some Dominion citizens who believe this is all a sham, and that the Exiles of Sunderstone are there specifically to drive the emperor's subjects from the region entirely.

Initially meant to be a temporary facility for holding Exile prisoners captured on the battlefield, Deadrock Prison in Whitevale has become more permanent than intended. Now holding not just POWs but all manner of criminals who have been taken prisoner by the Dominoin, Deadrock has grown overcrowded very quickly. Guards and prison officials believe the place is primed like a dying spindrive, ready to explode. It is uncertain how this could affect the balance of power in Whitevale, but odds are it would not be good for the empire.

"One thin about war - unless you're a genocidal maniac, it means you end up taking a lot of prisoners. POW camps are a fact of warfare. Not one I like, but one that's necessary."

"I have rules. Rule one: Do not engage the prisoner," he said. "Rule two: Do not attempt to befriend prisoners. Rule three: Violate any of the previous rules, and turn myself in for treason."

"All well and good. But you never said you couldn't fall in love with a prisoner, Warden," the Exile saboteur said huskily, her smoky eyes catching his own. "What would you say to that?"

Thermock Lake is home to many unusual creatures that have adapted to the strange Whitevale weather in a variety of ways. At the bottom of the lake are giant, subterranean clams that create the largest pearls known to exist in the galaxy. They are easy to find and retrieve, since the creatures that create them tend to spit them out onto the lakebed when they grow too large, and their shiny exteriors reflect and amplify even dim light. This material, which makes these pearls much prized by Lopp and other treasure hunters, is known as "gelidar," and gives these valued objects their name.